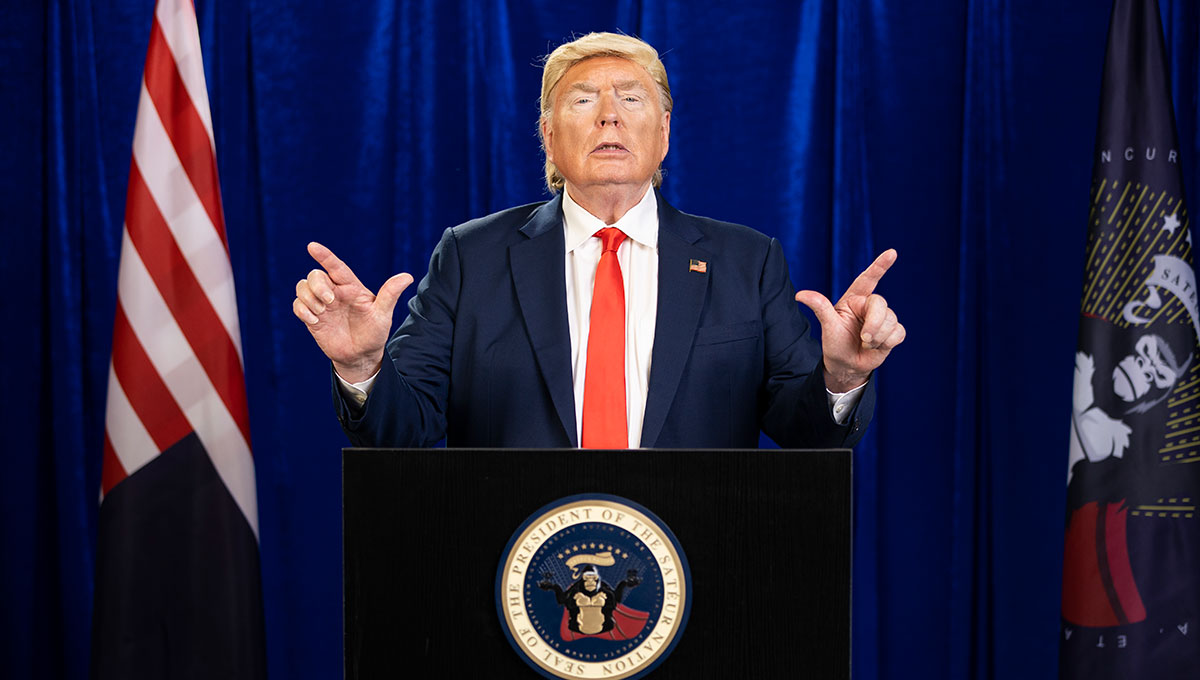 You must be thinking about why do we use Donald and Kim in our commercials and how they represent Satéur nation? The story is simple yet very interesting.

After the Satéur brand came into existence after the three long years of experiments and testing out different strategy before the 2 intrepid Canadians discovered an exclusive formula for combining different rare ingredients to form the sparklingly-cut Satéur Stone. After the little success in the market, Felix Francois and Michel D’aramitz planned to find some well known celebrities to represent their brand.

They tried to think outside the box, told themselves don’t bound by monetary concern and shoot for the moon, and ask who will be best fit to represent Satéur brand.

After spending many days doing countless brainstorming and researching about the possible tie up with celebrities, they came to learned that it will cost them millions of dollars to hire a popular celebrity. They felt devastated and were looking for something that can lead them to their next goal. Anybody could have dropped their idea at this point, but they decided to think something differently and take the lead to accomplish their goal.

Felix and Michel believe in famous quote “Small minds talk about people, and average minds talk about events. Great minds discuss ideas”. Finally, an idea was born. They decided to find the most famous person on earth there is – Donald Trump, the president! But only if they can afford it and they know at this point, he wouldn’t represent our brands. Suddenly, Michel D’aramitz saw celebrity impersonators and got to know about world famous President Donald and King Kim impersonators which cost them one percent of what it could cost them to hire the “Real” Donald and Kim. This idea seemed very feasible they decided to take this idea to a next level.

This is the same analogy that we follow at Satéur.

The Satéur brand references Donald and Kim because both world leaders mirror the ideals shared by Satéur. Our products are affordable compared to what’s out there in the market and these representatives were too. Owning high-quaity jewelry shouldn’t cost an arm and a leg regardless of how much your love for your partner is. At Satéur, we have made it possible to own conflict-free, superbly jewelry stones without encouraging instability somewhere in the world like diamond mining does. We created a lavishing Satéur™ stone for you which exactly looks like a diamond but costs less than 1% of real diamond price. We are all for world peace just like we want President Donald and King Kim to be too.

Do you believe diamond is truly rare? You’ll be shocked if you knew the truth. It isn’t as scarce as the world’s near-scammy Diamond Monopoly would have you think. If it were, you wouldn’t see it everywhere and so expensive too. If you want a jewel stone that is truly rare, the Satéur Stone is what you should go for.

Part 2: The Secret Behind President Donald’s Gift to Queen Elizabeth

Part 3: Things You Must Know About Kim’s Announcement of World War 3 Over Satéur Stone

King Kim got so angry after knowing that President Donald wants to take all the credit himself about Satéur stone discovery and lied about King Kim many times in the past. Kim is not a rocket man, he was just showing what the firework is. Kim has just announced the world war 3 unless Donald says Sorry to him.

President Donald and King Kim have many things in common and they decided to share the power in the best way by getting hitched for world peace. You too can join the movement of world peace by owning a sparkling Satéur stone.

You can join this revolution by picking your jewelry on your terms and own a finely-cut stone that matches diamond in every visible facet without the heavy price tag. They are not the real Donald Trump and Kim, Just as our sparkling stones not a diamond. It’s Sateur™. Satéur means taking charge of your life regardless of societal conditioning. Walk your own path freely, be different, be awakened as a free citizen of Satéur Nation!

Have you gotten something new on the Sateur store? You might want to take a quick tour right now to see what’s new. Visit Sateur Nation now, go here: www.sateur.com/shop